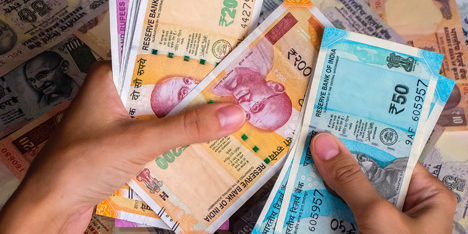 Mumbai: The rupee swooned on Monday to a new historic low of Rs 71.21 against the US dollar with no sign of the Reserve Bank of India intervening in the market to stem the slide in the Indian currency, which has tumbled 11.8 per cent since the start of the year.

The Indian currency now ranks among the five weakest emerging market currencies after the Argentine peso, the Turkish lira, the Brazilian real and the South African rand.

The rupee had opened strong early in the morning, largely underpinned by the strong 8.2 per cent growth in the April-June quarter. But that heady feeling dissipated quickly after a sharp rally in global crude prices dampened the overall trading mood. Benchmark Brent crude oil was trading at $78 a barrel.

The government and the central bank continue to be unfazed by the fall and believe that market forces should determine the value of the rupee, refusing to step in and prop up the rupee as long as the slide is smooth and gradual.

A surge in global crude oil prices and the contagion risks from the currency meltdown in Argentina and Turkey have deepened concerns in the global economy, which is already reeling after the aggressive response from US President Donald Trump to correct what he sees as inherent flaws in the world trading system.

Trump has attempted to renegotiate trade deals with his country’s North American neighbours, slap duties on over $200 billion worth of imports from China as early as this week, and threaten to walk out of the World Trade Organisation if it “fails to shape up”.

The Modi government believes that a fall in the rupee is not such a bad thing and will help exporters sell their goods in overseas markets. But that belief crumbles in the face of one stark reality: while the rupee has slumped by 21.7 per cent since the Modi government assumed office in May 2014, exports in dollar terms have fallen 3.5 per cent during that period from $314.40 billion to $303.52 billion.

The situation has put forex traders and importers in a spot as they try to figure out how far the rupee will be allowed to fall.

“The Indian rupee is expected to remain bearish against the US dollar and could touch 71.40 to 71.50 levels as oil prices are again inching higher,” IFA Global said in a research report.

HDFC Bank chose to be a little more conservative. It forecast the rupee at a range between 70 and 72 in the month of September against the dollar, sharply down from its earlier projection of 68 to 69.

However, it felt that the rupee would settle between 70 and 71 against the dollar by December and remain at that level till March next year.

The HDFC report has also scaled back its estimate for exports this fiscal to $332 billion from $338 billion earlier. One reason is that the yawning trade deficit – the gap between imports and exports – has expanded to $16 billion a month from its earlier estimate of $15.22 billion.

The report said there were several reasons why the rupee would continue to flounder against the dollar:

• The crisis in Turkey is unlikely to be resolved soon.

• Oil prices will stay in the range of $73-78 a barrel with the trade wars and the looming sanctions against Iran exacerbating risk.

• The RBI will not defend the rupee aggressively, which is obvious since the pace of intervention has slowed.

• Foreign institutional investor fund flows have picked up but the trend and outlook are not robust.

• Finally, political pressures domestically could pose some uncertainty for the rupee, with the state election results in Madhya Pradesh and Rajasthan driving the trend.