Market Reversals And How To Spot Them

Capturing trending movements in a stock or other asset can be lucrative, yet getting caught in a reversal is what most trend traders fear. A reversal is when the trend direction changes. Being able to spot a potential reversal signals a trend trader to get out of the trade when conditions no longer look favorable. Reversal signals can also be used to trigger new trades, since the reversal may cause a new trend to start.

In his book The Logical Trader, Mark Fisher discusses techniques for identifying potential market tops and bottoms. While they serve the same purpose as the head and shoulders or double top/bottom chart patterns discussed in Thomas Bulkowski’s seminal work Encyclopedia of Chart Patterns, Fisher’s techniques give signals sooner, providing an early warning of possible changes in the direction of the current trend.

One technique that Fisher calls the “sushi roll” has nothing to do with food, except that it was conceived over lunch where a number of traders were discussing market setups. He defines it as a period of 10 bars where the first five (inside bars) are confined within a narrow range of highs and lows and the second five (outside bars) engulf the first five with both a higher high and lower low. The pattern is similar to a bearish or bullish engulfing pattern except that instead of a pattern of two single bars, it is composed of multiple bars.

When the sushi roll pattern shows up in a downtrend, it warns of a possible trend reversal, showing a potential opportunity to buy or exit a short position.

If it occurs during an uptrend, the could sell a long position or possible enter a short position.

While Fisher discusses five or 10-bar patterns, the number or duration of bars is not set in stone. The trick is to identify a pattern consisting of the number of both inside and outside bars that are the best fit with the chosen stock or commodity using a time frame that matches the overall desired time in the trade.

The second trend reversal pattern that Fisher recommends is for the longer-term trader and is called the outside reversal week. Basically, it is a sushi roll except that it uses daily data starting on a Monday and ending on a Friday. It takes a total of 10 days and occurs when a five-day trading inside week is immediately followed by an outside or engulfing week with a higher high and lower low.

A test was conducted on the Nasdaq Composite Index to see if the pattern would have helped identify turning points over a 14-year period between 1990-2004. In the doubling of the period of the outside reversal week to two 10-daily bar sequences, signals were less frequent but proved more reliable. Constructing the chart consisted of using two trading weeks back to back so that our pattern started on a Monday and took an average of four weeks to complete. We called this pattern the rolling inside/outside reversal (RIOR).

Each two week part of the pattern (two bars on a weekly chart, equivalent to 10 trading days) is outlined by a rectangle. The magenta trendlines show the dominant trend. The pattern often acts as a good confirmation that the trend has changed and will be followed shortly after by a trend line break. 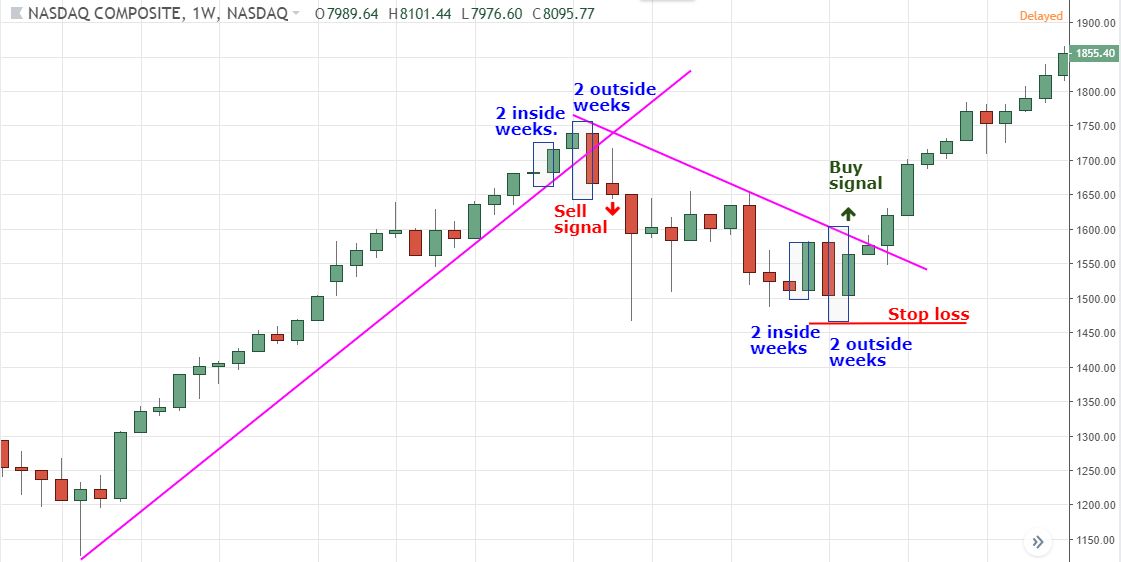 The test was conducted based on how the rolling inside/outside reversal (RIOR) to enter and exit long positions would have done compared to an investor using a buy-and-hold strategy. Even though the Nasdaq composite topped out at 5132 in March 2000, due to the nearly 80% correction that followed, buying on Jan. 2, 1990, and holding until the end of our test period on Jan. 30, 2004, would still have earned the buy-and-hold investor 1585 points over 3,567 trading days (14.1 years). The investor would have earned an average annual return of 10.66%.

The trader who entered a long position on the open of the day following a RIOR buy signal (day 21 of the pattern) and who sold at the open on the day following a sell signal, would have entered his or her first trade on Jan. 29, 1991, and exited the last trade on Jan. 30, 2004 (with the termination of the test). This trader would have made a total of 11 trades and been in the market for 1,977 trading days (7.9 years) or 55.4% of the time. The trader, however, would have done substantially better, capturing a total of 3,531.94 points or 225% of the buy-and-hold strategy. When time in the market is considered, the RIOR trader’s annual return would have been 29.31%, not including the cost of commissions. That’s quite a significant difference.

The same test was conducted on the Nasdaq Composite Index using weekly data, that is using 10 weeks of data instead of the 10 days (or two weeks) used above. This time, the first or inside rectangle was set to 10 weeks and the second or outside rectangle to eight weeks, as this combination was found to be better at generating sell signals than two five-week rectangles or two 10-week rectangles.

In total, five signals were generated and the profit was 2,923.77 points. The trader would have been in the market for 381 (7.3 years) of the total 713.4 weeks (14.1 years) or 53% of the time. This works out to an annual return of 21.46%. The weekly RIOR system is a good primary trading system but is perhaps most valuable in providing back up signals to the daily system discussed above. 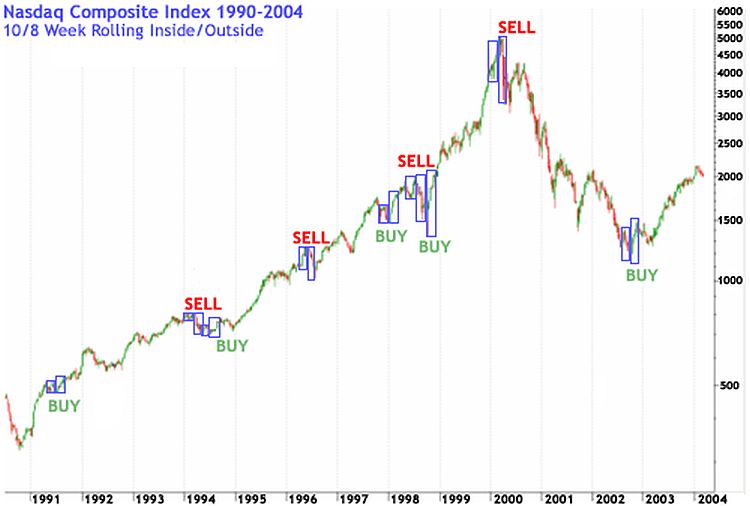 Regardless of whether a 10-minute or weekly bars are used, the trend reversal trading system worked well in the tests…at least over the test period, which included both a substantial uptrend and downtrend.

Any indicator used independently can get a trader into trouble. One pillar of technical analysis is the importance of confirmation. A trading technique is far more reliable when there is a secondary indicator used to confirm signals.

Given the risk in trying to pick a top or bottom of the market, it is essential that at a minimum, the trader uses a trendline break to confirm a signal and always employ a stop loss in case he or she is wrong. In our tests, the relative strength index (RSI) also gave good confirmation at many of the reversal points in the way of negative divergence. 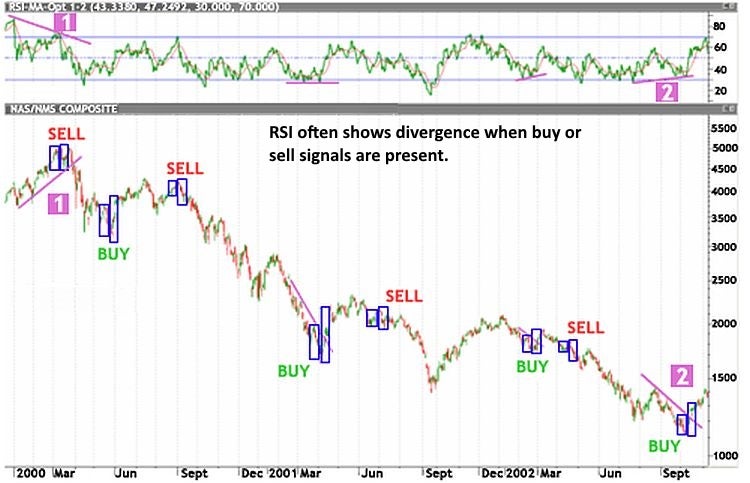 Reversals are caused by moves to new highs or lows. Therefore, these patterns will continue to play out in the market going forward. Watch for these types of patterns, along with confirmation from other indicators, on current price charts.

Timing trades to enter at market bottoms and exit at tops will always involve risk. Techniques like the sushi roll, outside reversal week, and rolling inside/outside reversal, when used in conjunction with a confirmation indicator, can be very useful trading strategies to help the trader maximize and protect his or her hard-won earnings.