Exposed: The trading courses that peddle an expensive pipe d…

Pipe dreams of a quick and easy route to financial freedom are being used to lure a new generation into risky, home-based foreign exchange trading.

Job ads and social media posts are sweeping the country, telling Britons they can earn four-figure sums every month by spending just half an hour a day trading on the currency markets. Those tempted are invited to free workshops or webinars, which are used as a platform to sell expensive training courses.

Accompanying software, said to help customers learn strategies to pinpoint profitable trades, is also sold as part of the package.

I attend two seminars to find out what is involved. 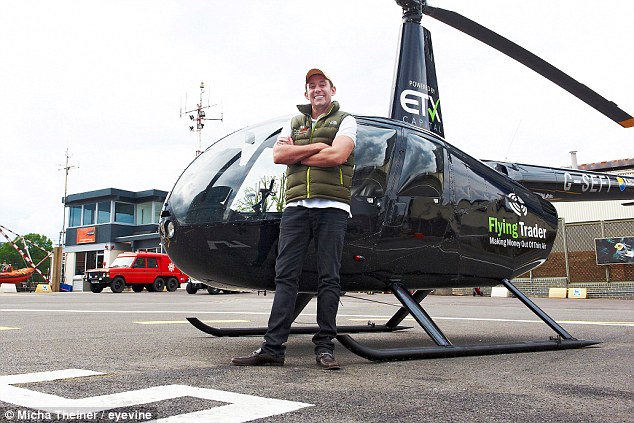 A job advert inviting me to start out as a ‘forex’ trader – with no experience of foreign exchange needed, sounds great – if unlikely.

I can earn a second income straight away, become my own boss in six months – and build a ‘concrete and reliable’ income using ‘recession-proof strategies’. I give it a go, as it seems I have nothing to lose – the advert says initial training is free.

When I click on the apply button I am taken to a web page where I sign up for a free two-hour workshop with Learn to Trade.

My session takes place at a hotel in Stratford, East London. Our group of 18 men and women of all races and ages enter the doors of one of the hotel’s suites to the dramatic and rousing soundtrack of Rob Dougan’s Clubbed To Death.

When the music stops a brief risk warning message is played over the speakers. We are then shown a slick video about the origins of Learn to Trade and its founder – businessman and ‘Flying Trader’ Greg Secker, who is known for completing trades while flying in a helicopter and donating commissions to charity. We are told his opinions are much sought after, alongside those of Donald Trump and Bill Clinton.

The video then cuts to footage of Greg the philanthropist – in a jubilant mood at a ceremony in which a hundred new homes in the Greg Secker Foundation Village were formally handed over to their new residents in the Philippines.

The properties were built for families displaced by Typhoon Haiyan in 2013. After the video, presenter Gurdas tells us that joining Learn to Trade was a ‘no brainer’ for him and that the money to be made is very attractive. 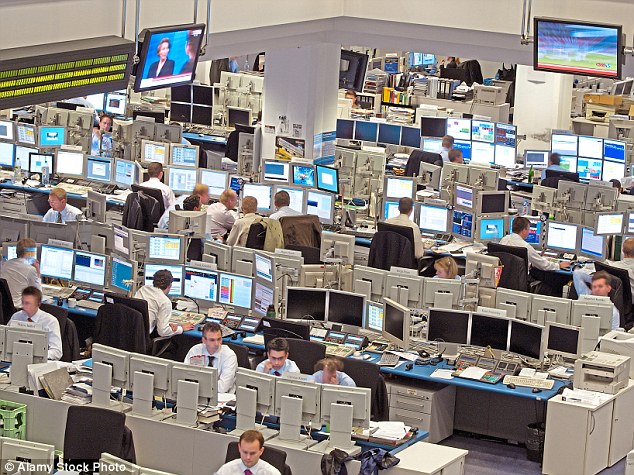 Buzz: The sites claim to bring the energy of the trading floor into homes

He asks the attendees why they are here today. One, Dwaine, wants a better life for his family. We are all assured that trading can fit around our family commitments.

Gurdas then says he can put us in the same buzzy environment as professional traders in the City – though I imagine this would require some suspension of disbelief.

As an added sales push, Gurdas says he is overseeing a ‘special project’ and wants to recruit 50 people for it. He has been presenting a few seminars around the country in a break from his usual routine, we are told, because normally other people are hired to deliver these presentations.

A search on the internet later suggests this is a tried and tested line.

The workshop focuses on everything that most of us desire – more time with family, less time in the office, financial freedom from the mortgage and bills, a bigger home, money to pay for a wedding, enough to meet children’s school fees, secure futures and more holidays. The implication is that forex trading will make the necessary cash.

There follows an introduction to foreign exchange trading. It covers ‘pip’ – a measure of movement in the exchange rate between a pair of currencies – chart trends when prices move up or down and how Learn to Trade’s ‘buy, hold or sell’ system works.

Stop losses – used to limit losses when a trade does not go your way – are also discussed.

Then it is back to the hard sell. Apparently the word ‘job’ stands for ‘just over broke’ – and aspiring to a salary of £40,000 a year only serves to cap our ambitions. That figure is unlikely to be enough for us to achieve our goals.

The next video is of offices around the world where the company’s traders gather on the trading floor. Every now and again I spot the logo ‘Unlimited Wealth’ on screen – the name of another course offered to pupils willing to pay for it.

Dramatic music is played as we see people in an office poring over computers and chatting.

Gurdas tells us that as part of the ‘special project’ he is overseeing we can access heavily discounted training, mentoring and software for £1,997 plus VAT, a reduction on the usual price of £6,995 plus VAT. This is our only financial commitment, we are told, though we do need to fund a trading account to get started. 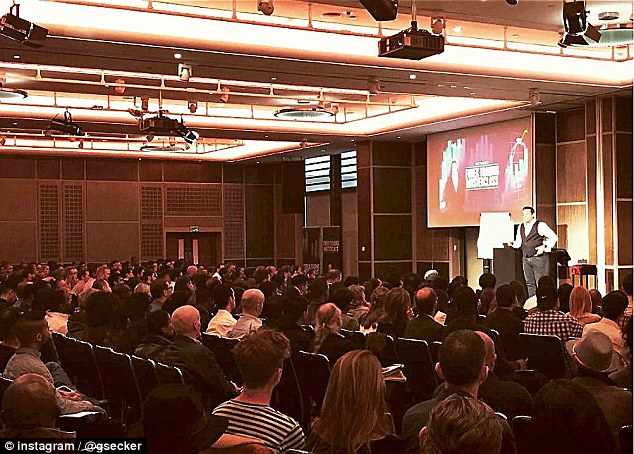 Hard sell: The seminars focus on participants’ desire for wealth

The account it recommends is with Capital Index – a broker also owned by Secker. When I check its website later I find it admits 79 per cent of its retail clients lose money.

Gurdas says he will not be repeating his offer as 45 places have already been filled – meaning there are just five spaces available for the 18 of us in the room.

The select few will also be asked to participate in a charity event and share their progress over 12 months with a few words to ‘inspire others’ for a new marketing campaign.

I decide not to take up the offer but, as I leave, I see Dwaine, the earnest young man who said he wanted a better life for his family, make a beeline for the forms and start filling them in purposefully.

I am not convinced and turn my attention to the wealth of other firms offering trading software and forex training via job listings, pop-up ads and Facebook posts.

One pop-up advert comes from Trendsignal, which suggests I can earn a four-figure sum monthly from forex trading – and this time I do not even need to leave the house to get started. 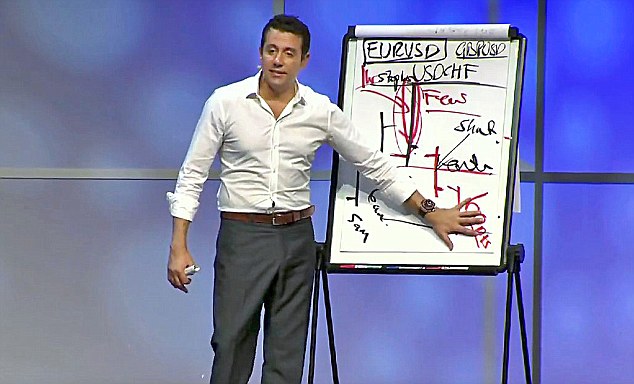 I take part in Trendsignal’s free online webinar to find out more about its ‘Sniper trading strategy’.

This is a less slick production than the workshop, but towards the end transformed into the kind of upbeat sales pitch you hear on TV shopping channels.

A ‘complete package’ costs £3,300 plus VAT. Refunds are allowed for those who change their minds in the first two weeks. Traders can also choose their own broker. But rather than part with my cash, I contact a former pupil whose testimony is on Trendsignal’s website.

Lisa Beaney says she is satisfied with the package and claims to have earned a supplementary income from trading. The professional photographer says: ‘It gives you a set of rules to follow and overall it made me money.

‘You do have months where you make a loss but the other months make up for it and Trendsignal is quite open about this before you start trading.’

She says the downside is that while Trendsignal got her interested in trading and she found the software useful, she had to put in a lot of time and effort herself – swotting up on brokers, the markets and charting options.

Trendsignal boss Adrian Buthee says: ‘We teach a specific set of rules for people to follow and cautious risk management techniques. We make sure to do things in an appropriate and fair way.’

He describes advertising via job websites as ‘inappropriate’ and says this is not something his firm does.

But he adds: ‘We use webinars as a way to reach individuals across the world who are interested in learning to trade the markets. Our customers tend to be aged around 55 to 60 and have one eye on retirement.’

James Mathews, head of Learn to Trade said: ‘In the past year we have taught hundreds of people at our trading centre a range of strategies and tools to help them start trading the market.’

The firm says traders never risk more than 2 per cent of their account on a single trade. A spokeswoman adds: ‘People do turn up and lose money but it is usually those who have not followed risk management rules.’

WHAT IS ACTUALLY BEING TRADED?

What many home-based forex traders are entering into are contracts for difference, or ‘CFDs’.

At my Learn to Trade workshop, the risks arising from CFDs were mentioned only briefly, just before the presentation began.

But this is perhaps the most important information. No currencies are physically owned and traded – the customer is essentially betting on the price movements on a currency pair.

So they may be putting a wager on whether the price of sterling will rise or fall against the US dollar in a set period.

They place their ‘trades’ with a broker, who takes a cut. They can also add a ‘stop loss’ to limit potential losses if the price of a currency falls too low. European regulators recently stepped in to protect novice customers from the downsides of CFD trading.

Restrictions brought in this month include preventing customers from losing more money than they put into their trading account. This safeguard will be in place for three months and could be extended or adopted more permanently.

The Financial Conduct Authority, which oversees financial services in the UK, ‘fully supports’ the new rules, which aim to stop customers from unknowingly taking on too much risk.

It comes after research showed that up to 89 per cent of customers across Europe lose money on CFD trades, with losses ranging from £1,400 to £26,000 per account.

WHO SHOULD RISK IT?

Laith Khalaf is senior analyst at Hargreaves Lansdown – a broker for traditional, long-term investors who want to invest in Isas, funds and shares. It does offer CFDs, but only to ‘active and experienced investors’.

Khalaf says: ‘Currency movements are notoriously difficult to predict with any accuracy and that applies in spades at a time when Brexit, politics and the potential for trade wars are causing ructions in global markets.

‘Buying and selling currencies is a risky business. This isn’t an area for first-time investors.

‘Getting rich slow is a far more reliable strategy than getting rich quick, which can often lead to rags rather than riches.’

Moreover, ‘buy before you try’ courses are a costly outlay for novices who go on to realise that trading is not for them.

I have learnt far more from free online videos 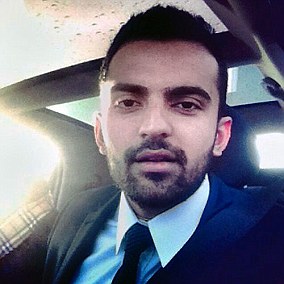 Learn to Trade asks those who sign up to its courses to provide a few words to ‘inspire others’. But the company is unlikely to want to use the comments of student Raghav.

The self-employed design consultant from Coventry signed up to a course last year but feels bitterly disappointed by the experience.

The 26-year-old says: ‘I have learnt more through free YouTube videos.

‘Learn to Trade spent a long time selling the dream rather than teaching me how to achieve it.

‘They made it look so good I forgot about why I came along, which was to learn.’

Enticed by the idea of reaching financial freedom he signed up to an additional ‘Unlimited Wealth’ training scheme. It was priced at £15,000, but Raghav could not afford that sum, so he says the firm let him pay £5,000.

After a few months of trading Raghav realised this path was not going to make him rich.

If anything he reckons he has made no money trading, but is now down £7,500 in course fees.